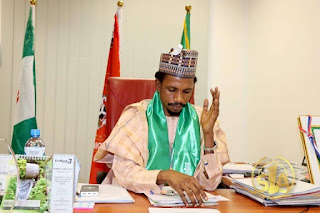 Mubi North Local Government stakeholders of the People’s Democracy Party (PDP) in Adamawa state denied being a part of a Press Conference against the Senator Ishaku Abbo who is representing Northern Part of the state.
The stakeholders in a fresh Press Conference in Yola noted that the few people present at the initial press conference were deceived and conned to be part of what they did not plan for.
A PDP party executive, Mr Jauro Abacha of Kolere Ward in Mubi North spoke on behalf of all the eight wards of the LGA executives of the Party told newsmen that their greatest Shocks and consternation is how they were conned by some of their folks into attending a sponsored Press Conference without consulting the real PDP stakeholders of Mubi North
At the Press conference, categorical statements were made against the sponsored Press Conference aimed at disparaging Senator Abbo and states as follows:

“That we only attended the sponsored Press Conference because we were deceived into doing so. The conveners told us to come to Yola to attend the judgment of the election tribunal, only to be commandeered into a Press Conference hall by some fellows.
” That we cannot identify with any arrangement that is predicated on lies and deception, which planning and arrangement we were not a part.
“That the fellows spearheading this charade are in fact members of other political parties as such they cannot be stakeh