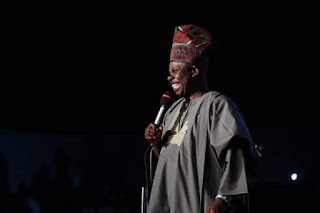 1. The above story by Premiumtimes, an online News portal, represented everything but the true and factual accounts regarding a routine exercise that took place at the Ogun State Governors Office, Abeokuta in the morning of Tuesday, 28 May, 2019 as part of Handing Over processes and formalities from the then out-going to the in-coming Administration. It is rather interesting and ironic that a  routine, bona fide and patriotic disposition of the Senator Ibikunle Amosun, CON, FCA has been so savagely twisted in a premeditated effort by Premium Times and its sponsors to stand logic on its head. It is important to clarify that NOT A SINGLE AK 47 RIFLE was handed  over at the event.

2. Senator Ibikunle Amosun would have loved to ignore this report for the simple reason that it is a matter for the remit of the Police and Security agencies. But, that course of action will appear disrespectful to well-meaning Stakeholders and inquirers on the matter. Secondly, the good people of Ogun State and Nigerians at large deserve to know the exact circumstances of the Handing -Over of these security items.

3. It is important to stress that this was not the first time that Senator Amosun, whilst in office as Governor and former Chief Security of Ogun State would be handing over security assets to the Police. The particular exercise of 28 May, 2019 was done openly in the full glare of the public and the media to ensure accountability, guarantee transparency and judicious use of the assets.

4. In May 2011 when Senator Amosun assumed office, the biggest challenge that confronted Ogun State was insecurity. Political assassinations, unnatural and unexplained deaths were prevalent. In Ogun East for instance, which comprised of 9 of the 20 LGAs at the time, the entire business and financial institutions architecture had become comatose as no bank or such institutions could open for business in the entire Senatorial district. Cultism, Kidnapping for ransom, violent crime and tertiary institutions related criminality stank to high heavens. Ogun West was totally ravaged by cross border banditry, unbridled smuggling and economic sabotage. Ogun Central, though relatively calmer, had its fair share of the very low security index that our State had sunk at the time. No resident, in good conscience, could sleep at night with two eyes closed. In the World Bank Ease of Doing Business, 2010, Ogun State was ranked as Number 35 out of 36 as industries and corporations fled the State in droves. Senator Ibikunle Amosun took the firm view that nothing would thrive in an atmosphere of insecurity. He therefore decided, that early, to confront the myriad security challenges headlong and thereby open up Ogun State to private investment under a secured environment.

5. The SIA administration convened a security Parley amongst all stakeholders. The Parley gave rise to the Ogun State Security Trust Fund (STF) under the leadership of a former Nigerian National Security Adviser. The deliberations and recommendations of the STF and the far-reaching initiatives of Government have delivered consistent peace of mind, economic prosperity and social progress for all within the borders of Ogun State and even beyond since 2012. We note with immense pride that the same Ogun State, generally regarded as a back-water State in terms of security rallied round strongly to emerge as one of the most peaceful and the best place to work and live in Nigeria.

6. The SIA administration sought help from the then President Goodluck Jonathan led Federal Government. First, we sought and got approval to set up “OP MESA” for Ogun State. We followed this up with the specialized QRS unit. We committed substantial funds into procurement of hard and soft ware, and, myriad security assets to decisively combat our security challenges. We got all necessary approvals from the Office of the National Security Adviser to procure the 13 units of Armoured Personnel Carriers (APCs), the 1000 units of AK 47 rifles, 2 Million rounds of ammunition,1000 units of Bullet proof vests and 500 bullet proof helmets and other security communication gadgets. Ogun State not only got approval to import these essential assets, the Federal administration under President Goodluck Jonathan, gave all requisite approvals to assist the State. The Federal Government through the Office of the National Security Adviser (NSA) issued the State the End User Certificate Serial Number 000001123 dated 5th of March, 2012. The Federal Ministry of Finance also granted Import Duty Exemption Certificate through a letter from the Honourable Minister of Finance and Coordinating Minister of the Economy with  Reference Number BO/R.10260/S.4/T.4/22 dated 10th April, 2012. Indeed the supplier was an accredited agent of the Nigeria Police Force nominated for the job by the Force who also monitored and supervised the transaction. The security materials were cleared through the Murtala Muhammed Airport and confirmed through Nigeria Customs Memo NCS/MMAC/012/S.1. The materials were publicly handed over to the Inspector General of Police MD Abubakar on 22nd April, 2012 wherein he acknowledged that “I have served in all six geographical zones of this country. I have never seen the kind of equipment you are donating to security agents today. This is the first of such maximum donation I have ever seen since I have been serving as a police officer”.

7. We would like to educate Premium Times that there are strict procedures for the purchase, handling, storage and documentation of security merchandise. We are satisfied that extant approvals, regulations and protocols were observed and complied with in this instance. Without going into the details and thereby breaching conventions, suffice to say categorically that the AK47 rifles were supplied directly to the Nigeria Police, Ogun State Command. The rest of the merchandise were  securely kept in the approved designated armoury within the Government House precincts under police surveillance as it obtains in most Government Lodges, to guarantee exclusive use of the materials in Ogun state. These are not matters for the public. Premium Times is advised to approach other States where such  conventions and protocols exit. The suggestion that the security assets were quickly handed over to the Police in order that the new administration will not know about it is laughable because the current Governor of Ogun State, Prince Dapo Abiodun, MFR was the main supplier of some of the assets in question, notably, the Armoured Personnel Carriers (APCs).

8. We say with pride that our substantial investment and commitment to security paid off. Ogun State won several international and local security awards. Companies returned to our shores in even higher numbers. Thankfully, under Senator Amosun’s watch, Ogun State did not record any unexplained death or political assassination throughout. Notably, Ogun State holds the record as one of the most peaceful States during the 2019 general elections and is now the investors destination of choice and industrial capital of Nigeria.

9. As a Governor who understood and took the responsibilities of his office seriously, Senator Amosun was mindful to account for and properly hand over the remainder of the security items to the Police and the new Administration. On 28 May, 2019, the last of the APCs, and all other security assets under the custody of Ogun State Government were passed over to the Police in full glare of the media and general public. We believed that was the surest way to prevent these assets getting into the wrong hands.

10. We assure our well wishers, Stakeholders and residents of Ogun State that we did what was best in their interest as the Chief Security Officer of the State. All contrary insinuations, twisting of facts and deliberate misinformation should be discarded. We encourage Premium Times and all genuine inquirers to approach the Police , Regulatory and Enforcement agencies for any other details they may want.

11. It is interesting to note that a public outing held on 28th May 2019 is generating so much interest three weeks after the event.