What Buhari Told United States President, Trump, When He Accused Me Of Killing Christians

Married at 13, mother of 8 at 27: How Enugu teenager finally escaped a life of hell 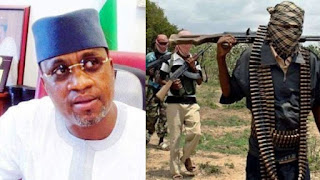 Senator Marafa whose sister was killed by armed bandits in Zamfara state few months ago, has revealed that the bandits have killed 11,000 men and orphaned 44,000 in the state so far. In a statement made available to journalists in Abuja on Sunday, Marafa, who is the Chairman of the Senate Committee on Petroleum Resources (Downstream) thanked his colleagues in the two chambers of the National Assembly for the provision of N10bn in the 2019 budget to address the deteriorating humanitarian crises in the state.
Recall that the National Assembly while passing the 2019 budget, made a provision of N10bn for the creation of an intervention fund to be called the Presidential Initiative on Zamfara State to cater for the humanitarian disaster in state.Senator Marafa who revealed that the bandits have killed 11,000 men and orphaned 44,000 in Zamfara, said his colleagues’ support for the initiative showed that with unity of purpose and direction, the country could overcome its challenges.
He said the “unfortunate and dark eight years of banditry from 2011 to date in Zamfara has conservatively led to the killing of over 11,000 male adults, leaving behind an estimated average of 22,000 widows – at two wives per person – and an estimated 44,000 orphans at an average of four children per deceased.”
www.ope2y.com
Please follow and like us: