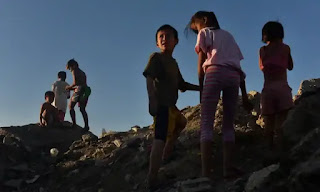 A law proposing children as young as nine be jailed for crimes is “wrong from every angle”, the head of the United Nations children’s agency in the Philippines has warned.

“If they grow up, spending their teenage years in a prison, they most probably will be damaged for life,” Unicef’s country representative, Lotta Sylwander, said in a telephone interview from Manila.

The current age of criminal responsibility in the Philippines is 15. President Rodrigo Duterte’s allies have been pushing to lower it, coupled with another draft bill that would restore the death penalty.

Politicians opposing the bills say their passing could lead to a situation in which a nine-year-old may be sentenced to death.

Duterte won May elections following a campaign in which he vowed to kill tens of thousands of drug dealers and promised to stop traffickers from using minors as narcotic couriers.

But Sylwander said a nine-year-old child is unable to fully comprehend the consequences of a crime, especially if they are coerced by an adult.

“Apart from the fact that it’s against human rights, it’s very unfair to a child, to punish them in such a harsh way as the criminal system would be, for something that they never understood was that serious.”

And she said the proposed law will not lower criminality and may have the opposite result. “By incarcerating children at such a young age, they in fact become well-trained criminals by being brought up in prisons with other criminals,” she said.

National police statistics show less than two percent of all crimes in the county are committed by children below the age of 15, a point Sylwander says Duterte has ignored in his support for the bill.

“It seems he rarely listens to facts, or doesn’t find out the facts before he talks,” she said.

“It doesn’t fix the problem, it’s a great child violation and it will be a great burden on the criminal system, an unnecessarily burden.”

She further criticised the president’s war on drugs, in which thousands of suspected drug dealers but also alleged addicts, have been shot dead. Children, too, have been killed.

“Yes, children are used as petty sellers … but why go after the children who do not understand what they are doing instead of going for the big syndicates?

“It seems there is less effort to get the big guys. You shoot the small gangsters or the small drug traders in the slum areas and the poor areas. But there seems to be no real, concerted efforts to get the big drug lords in the country. And there are quite a few,” Sylwander said.

The UN committee on the rights of the child has stated that setting the age of criminal responsibility below 12 is considered “not to be internationally acceptable”. And Unicef says alternatives to detention such as restorative justice programs can reduce offending by up to 70%.

The draft bill was introduced by house speaker Pantaleon Alvarez, who said the current age of 15 was “pampering … youth offenders who commit crimes knowing they can get away with it.”

The amendment would propose that children aged between nine and 18 are only criminal liable if they are “determined to have acted with discernment”, although it gives no specifics on how that will be decided.

Duterte’s allies in the Philippines house of representatives are likely to support the move and the proponents of the draft had hoped it would have been passed last year. But there has been growing opposition in the senate, delaying the bill.

Unicef has been working to convince politicians of its damaging implications, Sylwander said, in part by highlighting how children will likely have to share cells with adult offenders for months even before being judged.

“The court system is extremely slow so it would take a long time for these kids to be convicted, which means they will basically spend a long time in prison,” she said.