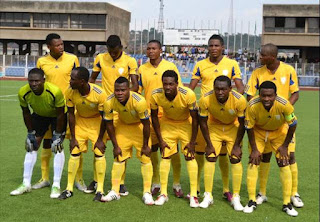 Plateau United Football Club of Jos on Tuesday, missed out on a place in the group stages of the CAF Confederation Cup following a 4-0 defeat against USM Alger in Algeria.

The match played at the Stade 5 Juillet was the second leg of their play-off round fixture.

The Nigeria Professional Football League (NPFL) Champions who won the first leg 2-1 lost out 5-2 on aggregate.

Coach Kennedy Boboye’s boys stood firm against early pressure from the hosts, but went behind in the 29th minute with Kaddour Beldjlali nodding home from a corner kick.

Ajiboye was,  however, unable to prevent Oussama Darlafou who scored USM’s only goal in the first leg from scoring another header four minutes before the break.

Darlafou got the third for the hosts and his second of the game from another header five minutes after the break.

With the visitors resigned to fate following a disjointed performance, Mokhtar Benkhermassa added the fourth  later on.

The three other NPFL clubs still left in the competition Enyimba FC, MFM FC and Akwa United FC will be in action on Wednesday