Home >>fomNews>>Father Assaults His Daughter For Refusing To Have Sex With Him In Delta.
adoshean January 26, 2018 fomNews 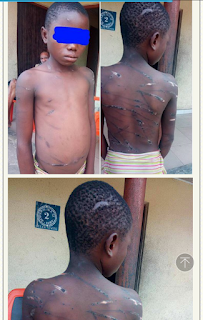 A father allegedly brutalized his young daughter in this manner for refusing to have sex with him. According to reports, the little girl who hails from Okpe Isoko in Isoko north Local government area of Delta state was maltreated and assaulted by her father, John Okeregu, who allegedly attempted to rape her. The girl was taken into custody of a good Samaritan as report has it that the king of the community is trying to cover up the case.
According to reports, after the news broke out, the Commissioner of Women affairs and the Attorney General of Delta State are said to have been made aware and are now interested in the case.
The local government chairman has also sent the counselor representing the ward to meet with the little girl to help serve justice. .
Source; https://www.nationalhelm.co/2018/01/father-assaults-daughter-refusing-sex-delta-photos.html
www.ope2y.com
Please follow and like us: