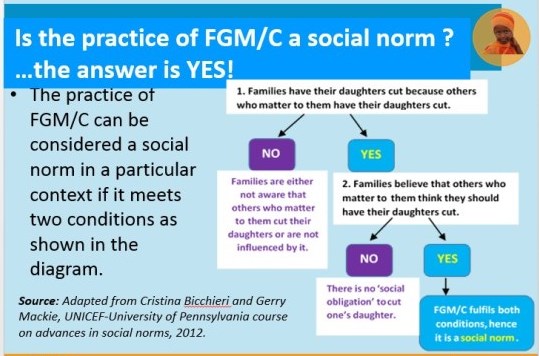 Female genital mutilation/cutting (FGM/C) refers to “all procedures involving partial or total removal of the female external genitalia or other injury to the female genital organs for non-medical reasons.”[1] FGM/C is a violation of girls’ and women’s human rights. While the exact number of girls and women worldwide who have undergone FGM/C remains unknown, at least 200 million girls and women have been cut in 30 countries with representative data on prevalence. However, the majority of girls and women in most countries with available data think FGM/C should end and there has been an overall decline in the prevalence of the practice over the last three decades, but not all countries have made progress and the pace of decline has been uneven.

The World Health Organization (WHO) classified FGM/C into four broad categories in 1995 and again in 2007:
Type I: Partial or total removal of the clitoris and/or the prepuce.
Type II: Partial or total removal of the clitoris and labia minora, with or without excision of the labia majora.
Type III: Narrowing of the vaginal orifice by cutting and bringing together the labia minora and/or the labia majora to create a type of seal, with or without excision of the clitoris. In most instances, the cut edges of the labia are stitched together, which is referred to as ‘infibulation’.
Type IV: All other harmful procedures to the female genitalia for non-medical purposes, for example: pricking, piercing, incising, scraping and cauterization.
FGM/C is condemned by a number of international treaties and conventions, as well as by national legislation in many countries. Article 25 of the Universal Declaration of Human Rights states that “everyone has the right to a standard of living adequate for health and well-being,” and this statement has been used to argue that FGM/C violates the right to health and bodily integrity. With FGM/C considered as a form of violence against women, the UN Convention on the Elimination of All Forms of Discrimination against Women can be invoked. Similarly, defining it as a form of torture brings it under the rubric of the Convention against Torture and Other Cruel, Inhuman, or Degrading Treatment or Punishment. Moreover, since FGM/C is regarded as a traditional practice prejudicial to the health of children and is, in most cases, performed on minors, it violates the Convention on the Rights of the Child. An interagency statement on FGM/C, issued by 10 UN organizations, was issued in 2008.

Available data from large-scale representative surveys show that the practice of FGM/C is highly concentrated in a swath of countries from the Atlantic coast to the Horn of Africa, in areas of the Middle East such as Iraq and Yemen and in some countries in Asia like Indonesia, with wide variations in prevalence. The practice is almost universal in Somalia, Guinea and Djibouti, with levels around 90 per cent, while it affects only 1 per cent of girls and women in Cameroon and Uganda.
However, FGM/C is a human rights issue that affects girls and women worldwide. Evidence suggests that FGM/C exists in places including Colombia[2], India[3], Malaysia[4], Oman[5], Saudi Arabia[6] and the United Arab Emirates[7], with large variations in terms of the type performed, circumstances surrounding the practice and size of the affected population groups. In these contexts, however, the available evidence comes from (sometimes outdated) small-scale studies or anecdotal accounts, and there are no representative data as yet on prevalence. The practice is also found in pockets of Europe and in Australia and North America which, for the last several decades, have been destinations for migrants from countries where the practice still occurs[8].
https://e.infogram.com/_/GynYAitT70okzXLTPv4r?src=embed

Girls’ and women’s attitudes about FGM/C also vary widely across countries. The highest levels of support can be found in Egypt, Gambia, Guinea, Mali, Sierra Leone and Somalia and where more than half of the female population thinks the practice should continue. However, in most countries in Africa and the Middle East with representative data on attitudes (22 out of 29), the majority of girls and women think it should end.
https://e.infogram.com/_/QA6r1O3Unbm1vjDPhC8T?src=embed

IS THE PRACTICE CHANGING?

Overall, the practice of FGM/C has been declining over the last three decades. In the 30 countries with nationally representative prevalence data, around 1 in 3 girls aged 15 to 19 today have undergone the practice versus 1 in 2 in the mid-1980s. However, not all countries have made progress and the pace of decline has been uneven. Fast decline among girls aged 15 to 19 has occurred across countries with varying levels of FGM/C prevalence including Burkina Faso, Egypt, Kenya, Liberia and Togo.
https://e.infogram.com/_/xc5Wbw71ecWs937qbuaM?src=embed
[1] World Health Organization, Eliminating Female Genital Mutilation: An interagency statement, WHO, UNFPA, UNICEF, UNIFEM, OHCHR, UNHCR, UNECA, UNESCO, UNDP, UNAIDS, WHO, Geneva, 2008, p. 4.
[2] United Nations Population Fund, ‘Project Embera-wera: An experience of culture change to eradicate female genital mutilation in Colombia – Latin America’, UNFPA, December 2011.
[3] Ghadially, R., ‘All for “Izzat”: The practice of female circumcision among Bohra Muslims’, Manushi, no. 66, September–October 1991, ; Ghadially, R., ‘Update on Female Genital Mutilation in India’, Women’s Global Network for Reproductive Rights Newsletter