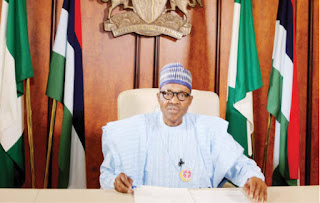 President Muhammadu Buhari says he is not in a hurry to do anything, noting that he would rather reflect and continue with his clear conscience. He spoke at the Presidential Villa in Abuja Thursday night while hosting leaders of the All Progressives Congress (APC) to a dinner.
“I keep telling people that while I was in uniform, quite reckless and young, I got all the ministers and governors, and put them in Kirikiri. I said they were guilty until they could prove their innocence. I was also detained too. I decided to drop the uniform and come back. Eventually, I am here. So really, I have gone through it over and over again. This is why I am not in a hurry virtually to do anything. I will sit and reflect and continue with my clear conscience,” he said. He, however, stressed that he was very much aware of the problems in the country and that he would always reflect on the historical antecedents before he got to power.

Buhari also said leaders of the All Progressives Congress are closer to Nigerians than he is, as he has been locked up at the Aso Rock Presidential Villa in Abuja. “Don’t allow anybody to talk of ethnicity. It is not true,” he said, dismissing insinuations in some quarters that he was playing ethnic politics, especially with appointments.
“There is something that hits me very hard and I am happy I hit it back at somebody. Seven states of the North are only represented in my cabinet by junior ministers, ministers of state. In the Southeast, I got 198,000 votes, but I have four substantive ministers and seven junior ministers from there,” he said.
Buhari recalled his travails at the courts for election cases in the past, saying those who stood by him were not of his religion and ethnicity. “I am the only politician that ended up three times in the Supreme Court and still virtually refused to give up. There is one thing that disabuses my mind in a dispassionate way about ethnicity and religion across the country.”
Buhari revealed that he went into coma when his predecessor, Goodluck Jonathan, called to concede victory to him before the result of the 2015 presidential election was officially announced. “The PVCs worked well in 2015. That was why when the former president rang me, I went temporarily into a coma. I will never forget the time. It was quarter after 5pm and he said he called to congratulate me and that he had conceded defeat. He asked if I heard him and I said yes and I thanked him for his statesmanship.
“The truth is after being a deputy governor, a governor, vice-president and president for six years, and he took that decision is great, he could have caused some problems. He had stayed long enough to cause problems,” he said.
APC National Chairman John Odigie-Oyegun said Buhari could not complete what he started in four years, saying that all he had struggled to achieve for Nigerians so far would be in vain unless he gets a second term.