This year’s Children’s Day attracted about 58 primary schools, 57 secondary schools and 11 Non-Governmental Organisation (NGOs), which participated in the traditional march past to celebrate the event in Ibadan, Oyo State.

The State Governor, Senator Abiola Ajimobi, read the address of the Acting President, Prof. Yemi Osinbajo, at the colourful event, which took place at the Adamasingba Stadium, Ibadan, on Saturday.

The governor also visited the Agodi Gardens to celebrate with the children, where he reinstated his administration’s commitment towards the protection of children against abuse.

In an interview with journalists at the end of the march past, the governor said that the nation would benefit immensely if the parents re-orientate and instill sound morals into their wards.

He condemned violence against children, saying the inhumane and barbaric tradition of female genital mutilation and the current trend of child abuse would no longer be condoned.

“The current trend of violence through child trafficking, child forced marriages, sex exploitation and abduction would no longer be condoned.

“The protection of the child and the promotion of their well-being are closely linked to development and well-being of the society.

“Violence against children, like child labour, takes place more in the developing countries and can have devastating long term impact on the well-being of the children as well as the progress of the society,’’ he said.

The governor said that his administration would continue to evolve policies and initiatives aimed at grooming the children for success and future of the country.

Olanrewaju appreciated the state government for not taking matters relating to their protection as very seriously as it was the practice in developed nations of the world.

He stated that the state government has instituted policies designed not only to ensure all children in the state enjoyed formal education but qualitative one, especially the recently constituted School Governing Board Model (SGB).

According to him, “this is why we children will continue to appreciate the hard work of Oyo State Government in prioritizing child protection as entrenched in the SDGs despite fiscal constraints.

“My fellow children, I want to encourage us to be good to our parents, be hard working, focused and responsible children in schools and at home.

“This will make our parents to do more in ensuring that our basic needs are met and our rights are given pride of place in the scheme of things and a better future is guaranteed for all and sundry.’’

Command Children School, Odogbo in Ibadan emerged winner of the march past of the primary school category, while Glorified Nursery and Primary and Saint Stephens Nursery and primary came second and third respectively. 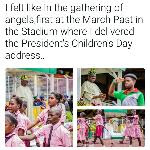